One of the best parts about traveling is the ability to experience a culture and area different from your own. When traveling to Portugal, in addition to the beautiful scenery, you will also be captivated by the regional flavors that make this area so unique. As you are planning your next adventure overseas, why not explore one (or more) of these three beautiful areas of Portugal.

As the capital, and biggest city in Portugal, Lisbon is a cultural and economic hub of the country connecting their vast history with modern day culture. Whether you are there for a couple days or more than a week, there is plenty to do or see. To get some of the best pictures, or if you’re hoping to catch a glimpse of the landmarks, go early in the morning. Take advantage of clear views by rising early and visiting the Praça do Comércio, Rossio, or wander through the Baixa and Chiado neighborhoods to enjoy these sights without the hustle and bustle.

One of the best views of the city can also be seen from the Moorish Castelo de São Jorge in Alfama overlooking Lisbon and the Tagus River. Go back in time by exploring this archeological site or climb to the top of the fort walls for an amazing aerial view of the city.
Lisbon is filled with burgeoning local artisans (and also some of the most unique street art and graffiti in the world) that use both traditional and modern methods to create unique giftware, home decor and fashion pieces. Head over to the trendy area of the Principe Real neighborhood (5 minutes from Bairro Alto) to check out the creative hubs of Embaixada and Entretanto that house a number of designers under one roof. Or, shop with bargain-hunting locals every Tuesday and Saturday at the Feira da Ladra (6am-5pm) in the Campo de Santa Clara, a lively outdoor market that’s home to a wide selection of vendors selling both new and old goods. Dating back to as early as the 12th century, and named in the 17th century, this market is the perfect spot to find Portuguese tile work or ceramics to bring home.

Only 4.5 miles west of the city, one of the most scenic ways of getting to Belém is by strolling along the pathway beside the water; however, it is also accessible by transit (Bus 28 Restelo direction, Tram 15 Algés direction, etc.). Belém is filled with historic sites, most notably the Torre de Belém and the Padrão dos Descobrimentos and the Jerónimos Monastery just behind the Jardim Praça do Império. Be sure to stop by Pastéis de Belém , the oldest bakery famous for making the popular Portuguese dessert Pastéis de nata created by the neighboring monastery in the 18th century. The Azores are a group of Portuguese islands in the Atlantic Ocean. Although Portugal has been increasing in popularity, these islands still remain relatively unchartered. This adds to their charm. Retaining an old world, quaint feel, the Azores are the perfect place for the explorer looking to island hop. Azores Airlines even offers flights connecting to mainland Portugal, in between the nine islands and across the Atlantic to North America.

Sao Miguel is considered one of the main hubs in the Azores. It’s the largest of all the islands and home to the largest city in the Azores, Ponta Delgada. Dedicate a few days to discovering this island to see both the city and some of its natural beauty. Head outside of the city to explore natural wonders like the Lagoa do Fogo and Caldeira Velha. The Azorean islands were formed in the mid-Atlantic Ridge where Eurasian and North American tectonic plates collide, resulting in geothermal springs like the Caldeiras das Furnas. Take time to drive through Ribeira Grande to visit Ponta da Ferraria and take a dip into the therapeutic waters or head to the area around Sete Cidades that offers accessible hiking trails.

A short flight from Sao Miguel, Pico is a charming island characterized its 2,350-metre Fuji-like volcano, which gives the island its name. The center area of the island is largely undisturbed as the Montanha do Pico takes up much of the natural landscape. Hikers from all over the world travel to Pico for a chance to climb to the volcano’s summit (three hours up and four down). If you’re curious, you can even go underground at the Gruta das Torres to explore the world’s longest lava tubes and its underground pathway of caves. Pico is also known for flavorful wines grown in a UNESCO heritage site located on volcanic vineyards. Miles and miles of intricate rock guards were constructed to protect the vines from the strong Atlantic winds. For those looking to try something local, the Terras de Lava and Frei Gigante are some of the most popular wines on the island.

Only a short boat ride from Pico, Faial is one of the three islands part of the central group of The Azores. This island is affectionately known as the blue island (named by Portuguese poet Raul Brandao) because of the hydrangeas that bloom throughout the island in the summer. Most visitors stay in the main port city of Horta that is a busy spot for yachts crossing the Atlantic. Sailors often mark their journeys by painting a small mural to mark their vessels, crews, and the years they’ve visited as a sign of good luck. However, to this day, the island of Faial still remains a natural beauty and is considered the westernmost point of Europe.

The city of Porto (awarded World Heritage status by UNESCO in 1996) was built along the hills that overlook the many shops and restaurants lining the Douro River. Originally a mercantile city, Porto shows a dynamic mix of new and old world styles with medieval architecture residing next to modern buildings. However, the wine cellars are the real attraction, found on the Vila Nova de Gaia side of the river and where tourists flock to explore and indulge in the region’s Port wine. 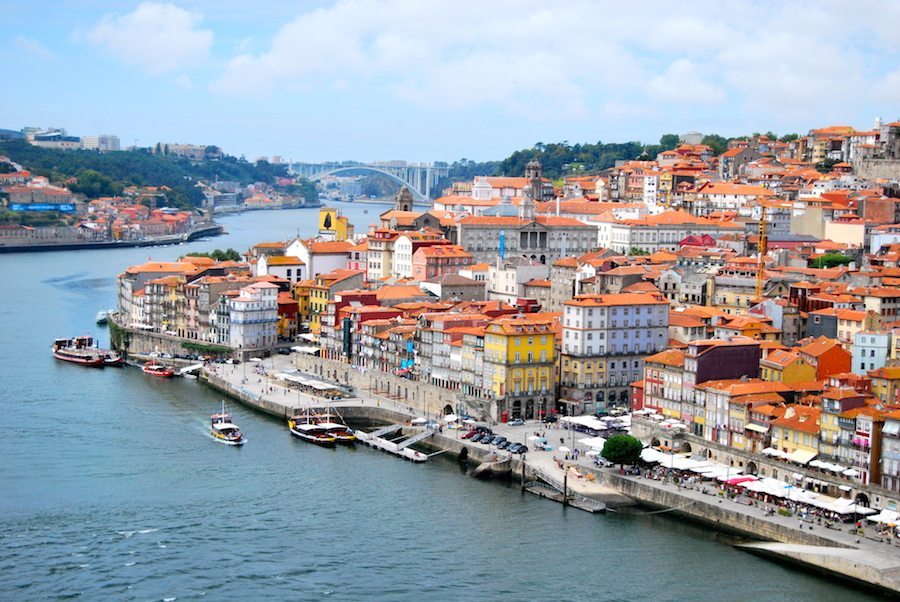 The wine grown in the Alta Douro Region is cultivated in breathtaking vistas along the Portuguese hillsides. The Douro Valley extends across the northern area of Portugal branching out from Porto to the eastern boarder. Take the time to drive through the winding roads and stop to taste the rich table wines and Port wines here. Unique to this area, Port wines are fortified Portuguese wines that are created by traditional methods, which includes stopping the fermentation of the must by adding grape brandy (benefício) and ageing the wine. Produced in the Demarcated Region of the Douro, Port wines are often of higher alcohol content (usually between 19% and 22% vol.) and known for their unique aroma and sweeter taste.

Once you head back into Porto, travel across the Douro River and take advantage of the many Port wine tastings that are found throughout the city. Many will offer a wide selection of wine served with small tapas for only €3-5. Some of the most notable winemakers in this region include Ramos Pinto, Quinta do Noval, Barros, Cálem, and Poças Júnior. Because of the distinctively sweet flavor of Port wine, it is traditionally enjoyed at the end of the meal or as a dessert. However, I love enjoying a chilled glass of Taylor Tawny Port as an aperitif contrasted with cheese and other savory appetizers.

Have you ever been to Portugal? What was your favorite region? Cheers to Spring with This Perfect Gin & Tonic If You Live Near a Park, Will You Live Longer?